Choosing the right type of cashew is crucial for making sure you get the most bang for your buck. There are a number of cashew grades and sizes available, and each one has its own features and benefits. If you are looking for the best cashews, you will want to consider the grade, number of nuts per pound and the quality of the nut. 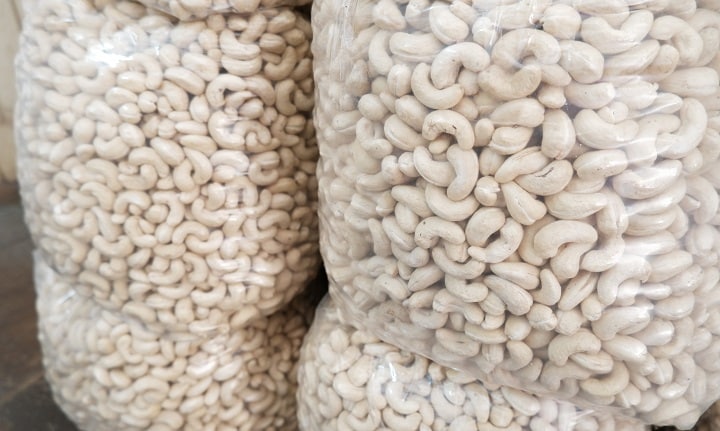 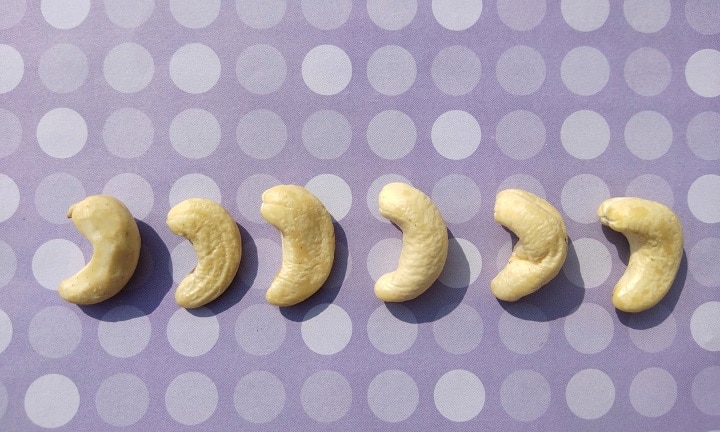 Based on their shape, size, and color, cashew kernels are sorted into white/scorched wholes, pieces, splits, butts, etc.
The Government of India Act says that there are 33 grades of cashew kernels. Only 26 grades are available on the market and are exported. These are:
* W-180 is the “King of Cashews,” because they are bigger and cost more.
* W-210 nuts are called “Jumbo” nuts by most people.
* W-240 is an attractive grade that costs a fair amount.
* W-320 Cashew kernels with the number W-320 are the most popular and easiest to find around the world.
* W-450 is the most popular low-cost whole grade because it has the smallest and least expensive white kernels.
Scorched wholes are another type of cashew kernels. They have a brownish color because they are roasted for a longer time. They are the same size, shape, and color as white kernels, and they have the same nutritional value.
Butts, splits, and pieces cost less and are great for cooking, making sweets, and making savory snacks.

FIRST QUALITY FANCY cashew kernels have a uniform color which may be white, light yellow or pale ivory.

FOURTH QUALITY cashew kernels would qualify as First or Second Quality, except that they have pitted spots.

Lightly Blemished Wholes (LBW) cashew kernels may be light brown, light ivory, light ash-grey or deep ivory. Kernels may show light brown speckles or blemishes on the surface, provided that not more than 40 percent of the kernels are affected.

Lightly Blemished Pieces (LP) cashew kernels pieces may be light brown, light ivory, light ash-grey or deep ivory. Pieces may show light brown speckles or blemishes on the surface, provided that not more than 20 percent of the pieces are affected.

Blemished Wholes (BW) cashew kernels may be deep yellow, brown, amber or light to deep blue. Kernels may be slightly

Whether you are looking to buy W-240 or W-450 cashews, you have to be aware of their different qualities. The two types are not only distinguished by size and price, but they are also known for their distinct flavor.

W-240 cashews are commonly used in nut mixes. Their price is lower than the other two, and they are the easiest to find. While they are not as large as the King or Jumbo varieties, they are large enough for most consumers.

What is Difference Between W240 and W320 Cashew?

The size of a cashew is determined by its weight. The weight of a cashew ranges from 1 to 2 ounces per pound, with the smaller and softer ones being closer to 1 ounce per pound.

The difference between w240 and w320 cashews is that w240s are smaller and softer than w320s, which are larger.

What does W180 mean in cashew?

W180 is 140-180 nuts per pound. Among all the cashews, W180 cashews are the highest grade. They have the highest quality, a good taste, and good nutrition. They are very popular in many countries. They are usually called the King of Cashews.

Compared to other grades, W 400 cashews are thinner. This means you will get 400 to 450 kernels in a single pound of cashews.

The best grade of cashew is the one that has the most nutritional value. A W-180 grade will offer more nutrition per nut than any other grade of cashew. A whole W-180 nut will weigh about 140 to 180 nuts per pound, and will be the largest sized cashew in the market. It will also have a high caloric value, which is why it is considered the King of Cashews.

The best part about cashews is that you can eat them on their own or use them in recipes. They can be added to a variety of recipes, including salads, desserts and candies. You can also process cashews into a variety of products, including cashew butter, cheese and nut butter. They are also great for sweet breads, and can be mixed with other nuts and dried fruits to create a variety of unique snacks.

The most expensive grade of cashew is the W-180. This grade is the best of the best because it produces the best quality nut, while still being reasonably priced. The W-180 grade is also known as the King of Cashews, which makes it even more valuable. It will also prove to be the healthiest cashew in the market because it will have a high caloric value and contain no cholesterol.

The W-240 grade is also considered a worthy contender. It is not as large as the W-180, but is still a decent size. It is also relatively inexpensive, and it is common to find these in nut mixes. They are also the easiest to find.

The best grade of cashew also comes in a smaller size, and they will be more affordable. They are a good choice if you are on a budget, and they are also smaller than the larger King Cashews. They also have a smaller number of nuts per pound, and will cost less than a whole King Cashew. It is also the best cashew in the market for health and taste.

It may be difficult to determine which grade of cashew is the best, but the W-180 is the best overall. It is also the most valuable, with its health benefits, high caloric value and great taste. It is also the largest cashew nut in the market, which makes it the King of Cashews. The W-240 grade is also a great choice, as it is a nice mid-grade nut and is reasonably priced.